A delegation from AVA-ASAJA visited the facility that the firm Hidrovoltaica RE S.L. has launched in the Civil Society of Regantes de Sant Vicent Ferrer de Monredondo, in Torrent.

With a total area of 2,500 square meters, the energy system replaces the current power supply to move the pumping motors to the irrigation raft.

The commoners will continue to pay in the first seven years the same cost of water (about 15 cents per cubic meter) in such a way that of the 75,000 euros per year that usually enters by irrigation, which are to pay the electricity company, now 45,000 euros are to amortize the credit and the rest to pay current expenses.

After 7 years, when credit depreciation is finalized, the cost of the cubic meter will fall in half. In 25 years, solar savings can reach 3.5 million.
Despite the lack of aid, such renewable energy installations offer both lower costs and reduced pollution. 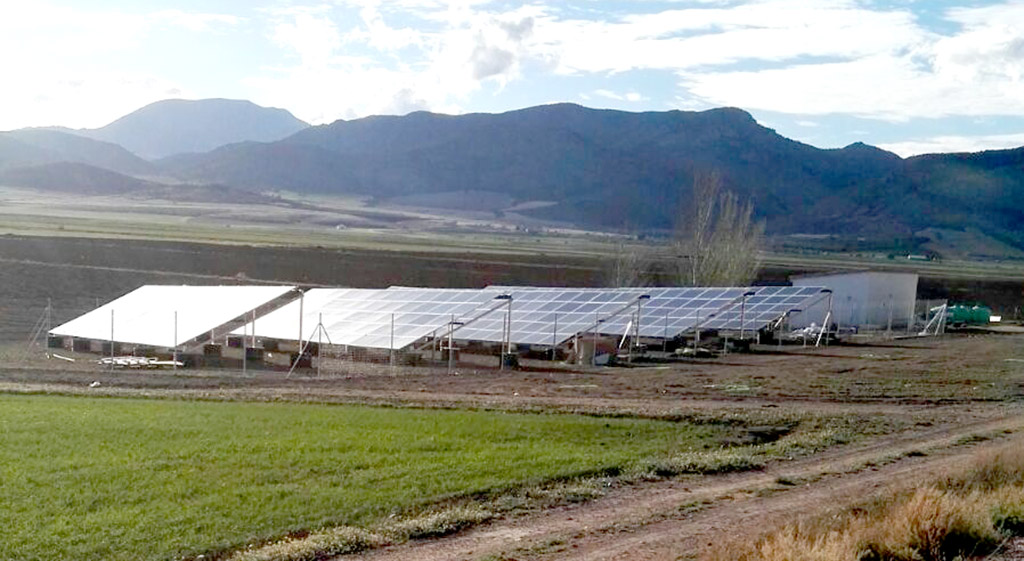 Very few dates ago, an irrigation facility has been launched in Puebla de don Fadrique (Granada-Spain) for one of our customers.

The insulated photovoltaic project began in April 2016 and was implemented in 8 weeks, and has succeeded in replacing the water well’s conventional energy supply for irrigation of an agricultural holding with photovoltaic energy.

To date, the well has been powered by a diesel generator set, which with this action is replaced by photovoltaic renewable energy. The characteristics of the pump are 100 hp and the flow rate pumped by it, 170 m3 /h.

Energy costs have turned out to be 5 times lower than the previous ones, which also no longer fluctuate with the price of diesel, but are fixed and, as we said, 5 times lower.

Irrigation is intended for horticultural cultivation and our technicians have carried out the necessary studies to assess the curves of photovoltaic energy production throughout the year and adjust it to the demand for water and the storage capacity of the agricultural facility, allowing the autonomy of the installation.

The owners of the facility will amortize this facility within 5 years, as they stop paying fuel for the generator set that operated the water pump and will pay the costs of amortize the installation. In seven years and assuming that the costs of diesel were fixed (unlikely) with fuel savings, the installation would be paid, complete, leaving residual costs of insurance maintenance and cleaning of photovoltaic plates.

Our team takes care of everything, hydraulic and electrical calculations of the project, legalizations if any, commissioning, subsequent maintenance, improvements and expansions.

The impact on business productivity is high, as it means lowering the fixed costs of the operation by more than 15 percentage points, which become cash flow or cash available to the business.

Another customer who is released from the electric bill thanks to the energy of the sun and TO HIDROVOLTAICA RE S.L.

Video of the insulated photovoltaic installation in Torrent, Valencia (Spain)

We echo the public news in the Valencian newspaper “Las Provincias” about the installation of isolated photovoltaic hydrovoltaica RE.

If farmers are aiming to grow more ecologically, the irrigators do not want to be left behind and intend to contribute sustainably to the preservation of the environment. This was devised by the members of the Civil Society of Regantes de Sant Vicent Ferrer de Monrredondo, in Torrent, Valencia (Spain), which with the installation of a photovoltaic plant on an area of about 2,500 square meters to move the engines that pump the water to the irrigation raft.

Ramón Merino, president of the community for just over a year, raised the possibility of installing this energy system to replace the current electricity supply. After presenting a pioneering project, the proposal went ahead and began the path to obtaining permits and funding, topics in which Hidrovoltaica RE s.l was actively involved.

The plant consists of five rows – the largest of 45 meters long and the smallest of seven – with about 700 panels in total. The facility will be able to move two engines of 75 hp each to generate the 1,500 Kilowatts needed to pump the water to a raft, located about 2.5 kilometers, with capacity for about ten million liters and supply about 250 hectares of farmland and an instant flow of 66 liters per second.

The depreciation of the facility will be about 7 years, including one year of lack negotiated with the bank.

-EXPECT TO HAVE AMORTIZED INSTALLATION IN 7 YEARS AND SAVE ABOUT 3.5 MILLION EUROS IN THE FIRST 20 YEARS-

For the first seven years, the comuneros will continue to pay the same cost of water – about 15 cents per cubic meter – in such a way that of the 75,000 euros per year that usually enters by irrigation, which are to pay the electricity company, now 45,000 euros are to amortize the credit and the rest to pay current expenses. After 7 years, when credit depreciation is finalized, the cost of the cubic meter will fall in half. Merino points out that in 25 years the savings from using solar energy can reach 3.5 million Euros.

In conclusion, Ramón Merino argues that despite the lack of aid and having adopted this solution early, he knows that it will be very profitable for the Community of Irrigators, they will contribute to combating climate change by not emitting CO2 into the atmosphere and that the surrounding irrigators are waiting to “see if it works and raise imitating”.